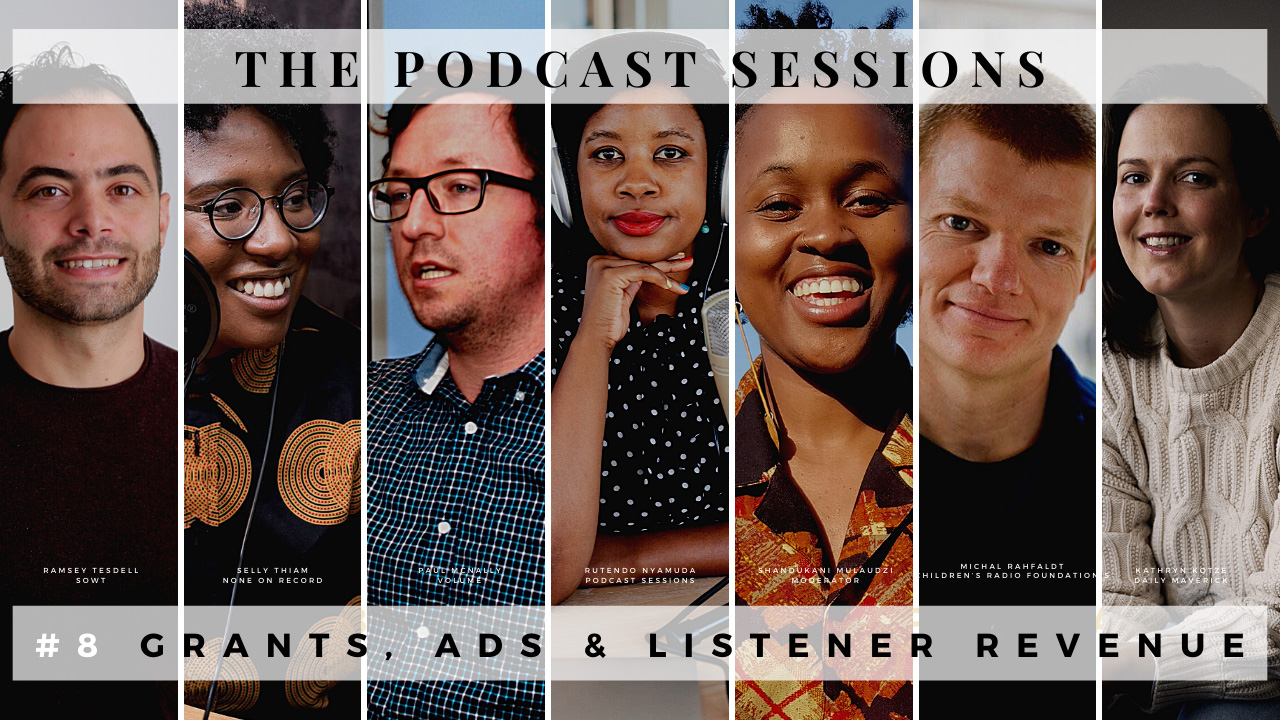 Lessons on podcasting for Sub-Saharan Africa

What does it take to build a sustainable podcast in the global South?

Maybe it’s just that we’re all stuck at home, but it feels like there’s been an exciting uptick in podcasting among the cohort of media organisations in the South Africa Media Innovation Program (SAMIP). It’s part of what we hope is a continued deepening and maturation of the medium in African media spheres. But what does it take to build a successful and sustainable podcasting enterprise in these contexts, when so much the discussion on podcasting is focused on North America and Europe?

To get the conversation started, SAMIP hosted a roundtable discussion featuring expert voices from our own cohort and the industry to share reflections on what it takes to reach sustainability with their podcast products and companies on the African continent.

You can also catch the discussion in a special episode of The Podcasting Sessions, hosted by Rutendo Nyamuda:

But while we’ve got you reading, here are a few things we learned.

Selly Thiam, from None On Record

The first thing that becomes clear is that some of the best podcast producers in Africa don’t see much prospect for advertising revenue for their shows. No African podcast is going to “brought to you by Audible”, or Stamps.com, or SquareSpace.

“In the beginning, there was a pressure for us to try to have a for-profit model for what we did. But that model wasn’t going to work, at least not yet, not here,” says Selly Thiam, the founder and director of None on Record, an LGBTQ-focused media organization based in Kenya, and host of the AfroQueer podcast. The show has picked up international acclaim for its storytelling of LGBTQ experiences across the continent (it was recently featured in the New York Times). But advertising – not so much.

“Even when we were approached to have someone sponsor advertising on our show, it ended up being something like $300. For the season! That was our first idea of how much money we were not going to be making through advertising.”

The success of AfroQueer allowed them to launch AQ Studios and raise grant funding for three new shows, which are due for release later this year.

The other panelists shared Selly’s view that a simple ad-driven podcasting business is a huge challenge in our parts of the world. This led the panelists and the organizations they run to experiment with different revenue models for their podcasting efforts.

Volume’s co-founder, Paul McNally, says the start-up has developed its expertise and revenue in helping other organizations and brands produce their own podcasts.

McNally is no stranger to the difficulty of getting advertising even onto successful shows. His true-crime podcast Alibi was syndicated on national radio in South Africa and received international recognition (the show’s first season appeared alongside Serial and S-Town on Mashable’s self-explanatory “best true crime podcasts of all-time” list).

“That was kind of heartbreaking,” he says. “And over the course of this year, we have got to this point where we don’t want to do podcasts which aren’t bringing in revenue… we couldn’t actually afford to plunge resources into an editorial product which wasn’t making any money.”

Instead, Volume has specialized in helping business and organizations create custom podcasts.In the last few months alone, Volume produced a string of high-quality social-justice shows for grant-funded civil society organizations: Kill Switch, a show about internet shutdowns; Access, a show about inequality in healthcare and pharmaceuticals, and of course with SAMIP, Volume produced Media Diaries, documenting through a series of WhatsApp voice notes how small media organizations were adapting to South Africa’s Covid-19 lockdown.

Volume’s work hasn’t been limited to the non-profit sector, however. They also recently helped one of the biggest law firms in South Africa launch its own legal podcast.

The medium as the revenue

Daily Maverick’s Kathryn Kotze says the expertise and distribution platform the organisation built up for its in-house podcasts may have created a revenue opportunity in distribution.

Don’t Shoot the Messenger is Daily Maverick’s flagship podcast, hosted by prolific columnist Rebecca Davis. But, says Kotze, even after a successful first season, high production values, and the built-in audiences that Davis and Daily Maverick can bring to the show, commercial sponsorship hasn’t come automatically.

“Even with a sales deck and numbers and analytics and graphics and something that advertisers can listen to, it’s still a difficult sell,” she says. “We’ve had a lot of interest, but nobody’s actually signed on the dotted line yet.”

However, Kotze says they noticed that despite being on all major podcast platforms, 50-70% of their listens were still generated through an embedded web player on Daily Maverick’s website.

“So, we know that the success of our podcast hinges on our audience listening through our platform, which has led us to redesign and redevelop how we distribute it,” she says. That meant developing custom article layouts that look more podcast friendly, and redesigned HTML elements for their newsletters that made clicking through to the podcast as easy and appealing as possible.

“We see there are a lot of corporates who are very interested in podcasting, but what they’re interested in is conveying their own message in their own podcast,” says Kotze. She says Daily Maverick is exploring the possibility of using their IP and tech platform to serve a distribution channel for commercial podcasts looking to get out to market.

The Children’s Radio Foundation’s (CRF) podcasting entity, the Radio Workshop has a mixed revenue model – grant funding and for-profit – which has given them “a bit of runway” to experiment and research. “Key to any kind of deal or monetization is a good product,” says the CRF’s Michal Rahfaldt. “A lot of the production decisions are actually business decisions on the ways in which we’re going to make sure we have a quality product. We also have put a lot of energy into doing research on podcasts, markets, and business development models.”

Podcasting may be a nascent form in many African media spheres, says Michal, but there is no shortage of storytelling expertise. CRF has built up a network of storytellers and journalists in the region – the kind of person who’s a fan of podcasts and might have a pet project but doesn’t yet have the skills or the platform to bring it to life in podcast form.

“So, our model is soliciting pitches from these contributors and working with them to shape their story for our podcast, where they work with one of our producers and also an experienced podcast editor, which is key.” says Michal. “They get paid for what they produce for us at market rates, but also get a hell of a lot of training and mentorship, and some support on their pets projects.”

In developing podcast-specific expertise, Michal says CRF has sometimes looked for skills in unusual places. For example, they’ve worked with hip hop producers and beat makers to train them in sound design for podcasting.

“In terms of business sustainability, we really need to make sure that we’re building specific podcast roles across Africa, across languages, editors, sound designers. We’re trying to think creatively about people who are already playing similar roles in other media institutions that could be amazing in a podcast role with some tutelage,” he says.

Don’t rule out the donors

Jordan-based podcasting company Sowt has also developed a mixed-revenue model for their organization that relies in part on donor funding. This is something that they have in common with None on Record who’ve also relied on grants as a source of revenue for their operations.

“Grants are a good part of our business. Model service grants and contracts are another part. And then the third part that we’re working on right now, is listener revenue,” says Sowt co-founder and director Ramsey Tesdell.

Part of Sowt’s success in attracting listener revenue has been their ability to get listed in the top podcasts within the region they operate in. According to Ramsey this is something anyone can achieve by getting in touch with their regional representative for major podcast platforms (i.e. Apple Podcasts and Spotify) for advice and to market their product.

Irrespective of where the revenue comes from, each of the people who spoke to said aspiring podcast makers should be sure to realise that producing a high-quality show is going to take serious resources, and the resulting product may not pay for itself anytime soon.

Michal Rahfaldt, from the Children’s Radio Foundation, advised on setting a budget early on and tracking both the spending against that budget, and the investment of people’s time on the project: “Try to track how much time each staff person is really to spend willing to spend on each show. That will help you get a better idea of what shows actually cost the most.”

Selly Thiam, from None on Record, cautions that the costs of narrative-based shows are particularly high. “Our next show is a bit more of a chat cast, and the budget is maybe 20% of what we spent on AfroQueer,” she says. “We are smarter in terms of looking at different kinds of shows that we can produce for a quarter of the budget, and actually are probably going to be profitable much quicker.”

In fact, Selly says one unexpected result of the Covid-19 pandemic has been to limit the amount that her team could travel to produce their more research-intensive shows. “That has actually saved us quite a bit of money. It’s been a bit of a blessing in disguise in terms of having us forcing us to sort of fine tune our production.”

One thing that was certain from the discussion: there are many ways for podcasting to succeed in an African media context, and none of them will look exactly like what’s brought success to podcasts in the United States, Canada or Europe. But the conversation, just like many African podcasts, is just getting started.

You can also hear this panel discussion as a special episode of The Podcast Sessions, hosted by Rutendo Nyamuda: